When watching our display in 2011 we realized we wanted something to fill the large section of roof facing the street. Much of the time we see houses with great rooflines and peaks that beg to be lit with Christmas Lights, and our rather “square” and “flat” roofline isn’t terribly appealing. This lead us to brainstorm ideas. We talked about putting the reindeer up there, or maybe an assortment of snowflakes until it hit us (well, in full disclosure it hit Tiffany). Everybody does mega trees, why not a mega wreath.

When planning we found only 2 other mega wreaths constructed. One had canvas in the middle that was used as a projection screen and the wreath was 3d and beautifully constructed. Not quite what we were going for, and didn’t store well. The other was hung from a 3rd garage door and again, not quite what we were going for, so we had to come up with everything on our own. 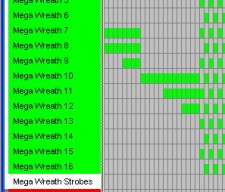 After some discussion we both liked the idea of having 16 individually controllable segments. This would give us quite a bit of granularity in sequencing for the types of things we had in mind. I know we wanted different kinds of spins, the ability to do some other effects like “plus sign” or “every other segment” patterns, and more. With 16 segments we planned to utilize one of the 24 channel controllers already purchased and have a few spare channels in case we had triac failures or anything and needed to swap things mid-season. Coming from a Jeep background I like being prepared and having spares. We knew we were using incandescent lights for this so we chose to use the Frank’s Renard 24HC to control this because it can handle more current than the other controllers we have. Breaking the sequencing equation into 16 channels also led us to the next design goal of storage.

Since we were going to sequence these in 16 segments, we came up with a way to create the wreath using 16 physical pieces. Each piece would be a “pie slice” section of the wreath. We drew out a giant (around 19.5′) circle on the driveway in chalk and halved it 4 times to create our segment size. From those measurements I built 1 segment’s structure in PVC. We came up with a design that uses 4 elbows, 2 tees, and 7 individually cut pieces of PVC. This skeleton shape is big, but not too big to get up into the rafters easily for storage. We stuff about 10 in one spot and 6 in another.

With green lights the wreath would looks great at night, but we didn’t want an ugly mess of incandescent lights and PVC on our roof during the day so we put a lot of effort into the daytime aesthetics of the wreath. Since we were planning this before the end of last season we purchased enough garland at after Christmas sales to completely stuff a commercial 32 gallon trash can. We wrapped each of the 16 individual segments of the wreath PVC in garland and lights. In addition to the green, we sourced some “unbreakable” ornaments which we hot-glued into large “mega ornaments” that were mounted to 8 of the segments. These were to be centered around a strobe light

for added effect during the show. They were a little problematic because the ones covered in glitter would tear off the glitter “skin” and break our mega ornaments. These required special handling and some repairs as we were working on building everything. All in all, this gave us the look we were desiring because we believe the wreath looks great during the day as well. For information on the strobe lights used here, please see the Strobe Randomization page.

If you’re following along, we’re arriving at a cost of just under $100 before tax. Not bad for an almost 20′ mega wreath!

We were planning on building some sort of structure to “raise” the top portion of the wreath to increase the viewing angle but decided against it come installation time. We didn’t want to risk problems with our first year with the display item. We had it flat on the roof and haven’t had any problems with it. It likely would have stayed put just based on friction, but two segments are strapped using 1/8″ steel rope to an eye bolt on the roof truss’s ridge timber. It’s not going anywhere! I took segments up one at a time for placement. I used 3 zip ties per adjoining edge to join them together. Once I had 6 segments up (the top portion) I attached the steel rope. It is looped around edges of 2 adjoining segments of the wreath to increase stability. I then brought up the remaining 10 segments and simply zip tied everything together. Luckily I’m tall so I have long legs and can step over the large segments safely on the roof to get from the center for installation. 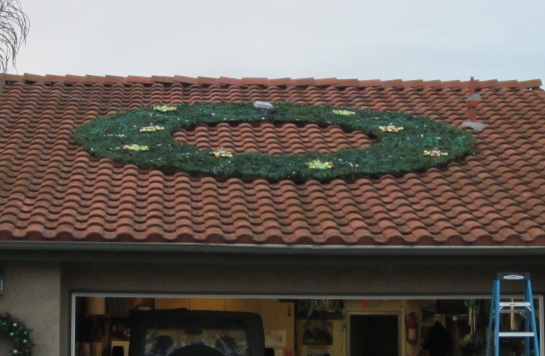