We had planned on building a mega tree in 2011 but as we quickly learned, this “blinky flashy” hobby takes a lot of time and money. Time and budget didn’t allow for this to happen in 2011. During the summer of 2012 we finally got around to installing our Uncommon brand flag pole. It is a telescoping flag pole which uses a 3″ pvc ground sleeve. The ground sleeve is about 28 inches deep, 24 inches wide and contains 250lbs of concrete surrounding the PVC. It is very sturdy and it was placed and planned specifically to be the center of our mega tree as well as allow room for a vehicle to drive by into our back yard if needed for projects or storage. 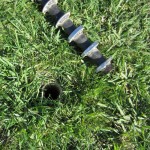 The flag pole’s PVC has a 3″ inner diameter and in order to work we needed something to space out the 1-¼” steel pipe. Special thanks go to Ted Wiest (tweist from DIYC) for picking up the 1-¼” steel pipe for the center pole of the mega tree. Second special thanks goes to Jeff who made the steel rings out of some scrap metal using his lathe. They are like giant washers to center and secure the 1-¼” steel pipe in the 3″ flag pole sleeve we have installed in the front yard. All other items were purchased long ago and have been baking in the garage.

I began by welding the “washers” to the pipe. We realized how terrible of a welder I am, but actually, half the reason I wanted to use this method of securing the pipe was for some welding practice. Unfortunately I was going for too close of a clearance on the ID of the washers when giving measurements to Jeff so I had to use the dremel to make the centers slightly wider. I figured it would be slightly easier to make the inside of the washers bigger with the dremel than it would be to file down burrs and other imperfections of the pipe.

Once all of the washers were welded on, the OD was a little tight for the ID of the sleeve so out came the grinder with a flap disc. Again, this was because the OD I gave Jeff was so perfect, they fit individually, but with the friction of 7 “washers” the fit was so tight I was worried I’d never get the center pole back out for the flag pole the rest of the year!

After a bit of grinding, the first piece of the center pole went up. I re-checked the angles I thought I wanted and cut the second 1-¼” pipe down such that I had 16’6″ of pipe above the ground for the center. With 18′ rope light for the strands and angles of 30°-60°-90° I thought I had things perfect. I began crimping the swage connectors on the wound steel rope and finished 4 lines on the first day. This gave me an idea that of the size/shape/stability of the tree.

The rope light itself is not self-supporting. I read that rope light will fail if suspended because it will stretch and tear the internal wires that run through the rope light. Because of that I zip tied every couple feet to 1/8″ galvanized steel rope like this. The tree is VERY sturdy. In the worst storms we’ve had in 2012 (which weren’t much of anything) the tree didn’t even budge. Even with zip tying, we still had 3 failures. One failed with the bottom 3′ going out within the first couple days and I replaced it. Another had a 3′ section at the bottom out as well which I “wiggled” and it started working and has worked ever since. I have 1 that has a 3′ section out in the video, also the bottom segment of the rope, which is actually the first 3′ from the plug. It’s not worth fixing this year with the lights only on for another couple days.

The tubing is clear(ish). I bought it when it was $5.99 at geeks.com. Their warehouse used to be a block from my house so I picked it up. I’m not sure if the reason it was sold through them (they sell mostly refurbished computers and peripherals) was because of the lack of consistency or what. The reason I say that and the reason I say it’s clear”ISH” is that some have faded due to UV damage much more than other strands even though they’ve all been in the elements the same amount of time. When viewing the show it’s hard to tell, but if you walk up to the strands when not lit, some are much more yellowed than others. Their LED spacing looks to be about 1 LED per inch.

Similar to the randomization required for the Mega Wreath, I wanted to do something similar for the Mega Tree. In order to accomplish this I partially populated a MegaDirkCheap SSR for switching the AC and used an Arduino clone for control. The specific Arduino clone I’m using is the Anatools Anarduino which was scavenged from my horae project last year which read in Renard data and controlled our GECEs. It took me all of 5 minutes to write the code for this since it’s quick/easy C code.