The last couple of years at our Jeep Christmas party a friend puts rope light on his Jeep and teases us that “you crazy Christmas light people” don’t have any lights on your Jeep.  I knew that this year the party was later and if my show was up and running I’d have time to throw something together, so here’s the results of that.  Hi Kurt!

I wanted something that was easily powered in a vehicle, so I knew pixels would be a good choice.  We have a stockpile of GE Color Effects lights that run on 5V from years past, so I figured they’d be a good place to start.  With a high quality USB charger, it would be easy to power a strand of these lights and a controller.

In order to control the lights, I wanted to use wireless because I have a stash of RFColor2_4 boards which are designed to fit inside of the stock GE Color Effects enclosure and run on 5V.  They use a triangle security bit, but I was able to fashion a tool for those using one of those alan wrenches that you get with cheap furniture or similar.  I just dug it out of my parts bin and hit it with the dremel until it worked. 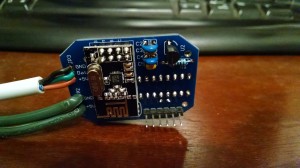 For sequencing, it was very easy to set up a quick profile in Vixen 3 that patched the 50 pixels and previewed them on-screen.  Setup of this took probably 5 minutes and we were ready to sequence.  I chose Weezer’s “Hark! The Herald Angels Sing” because it’s simple and quick.  Tiffany chose to sequence August Burns Red’s “We Wish You A Merry Christmas.”

I’m a developer for FPP and have previously added channel output type for Renard so I knew the design of that code and how easy Chris made it to add output types.  I had planned to add Komby protocol nRF output for quite some time, but didn’t get to it before this particular project.  Not to mention the fact that the Pi run on 5V and is easily powered from a microUSB, which makes it easy to use a phone charger in a vehicle.

I had some RF24 library examples compiled on the Pi at one point, and some of the UI work done.  That was good because all I had to do for that work was resurrect those bits from branches and archives and get the rest of the code completed now!  I hooked up an nRF radio to my Pi using jumper wires and got to coding.  Within a couple of hours I had the code checked in, tested, and working.

There are really only 3 pieces to this when I’m “on the road”: