Welcome to the 2012 Christmas season! The lights go live December 1st! For more information on this year’s display, please visit the Christmas 2012 page which has all the details for the show this year like hours, location, etc. 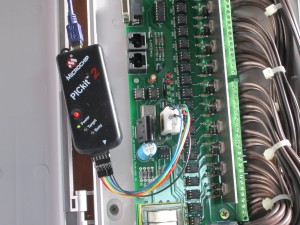 Today we began construction of the Mega Tree. It has been in the planning stages for months and most pieces were acquired. Special thanks go to Ted Wiest (tweist from DIYC) for picking up the 1-1/4″ steel pipe for the center pole of the mega tree. Second special thanks goes to Jeff who made steel rings out of some scrap metal using his lathe that are like giant washers to center and secure the 1-1/4″ steel pipe in the 3″ flag pole sleeve we have installed in the front yard. All other items were purchased long ago and have been baking in the garage.

Today I began by welding the “washers” to the pipe. I realized how terrible of a welder I am, but actually, half the reason I wanted to use this method of securing the pipe was for practice. Unfortunately I was going for too close of a clearance on the ID of the washers when giving measurements to Jeff so I had to use the dremel to make the centers slightly wider. I figured this would be slightly easier than filing down burrs, and other imperfections of the pipe. Once all of the washers were welded on, the OD was a little tight for the ID of the sleeve so out came the grinder with a flap disc. Again, this was because the OD I gave Jeff was so perfect, they fit individually, but with the friction of 7 “washers” the fit was so tight I was worried I’d never get the center pole back out for the flag pole the rest of the year!

After a bit of grinding, the first piece of the center pole went up. I re-checked the angles I thought I wanted and cut the second 1-1/4″ pipe down such that I had 16’6″ of pipe above the ground for the center. With 18′ rope light for the strands and angles of 30°-60°-90° I thought I had things perfect. I began crimping the swage connectors on the wound steel rope and finished 4 lines for today. This gave me an idea that of the size/shape/stability of the tree. As I alluded to in this paragraph I wish I hadn’t cut quite as much off the center pole and the bottom was a little less “fat”, but this will have to do for this year. 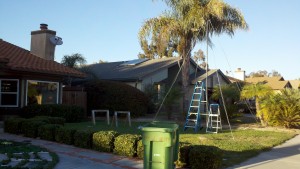 We have another Mega item that we’ve only told a few people about… A Mega Wreath. We’ve seen a few variations of a Mega Wreath when searching the internet, but nothing quite like what we’re going with. It is a 16 segment monster that will adorn the roof above our garage. The roof above our garage felt very “blank” last year and Tiffany thought of a giant wreath to fill it. The wreath itself was constructed using PVC. Each of the 16 segments (easier for storage) is made up of 7 individual sections of PVC with 2 tees, and 4 elbows. Once that is complete, each has a combination of twine, plastic rabbit fencing, and garland obtained at after-Christmas sales last year. The garland will make the wreath more aesthetically pleasing during the day. 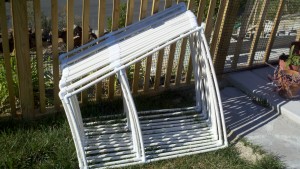 In addition to the garland making the wreath more aesthetically pleasing, we purchased a box full of “unbreakable ornaments” mid-summer that were hot-glued together to make large ornaments to spice up the wreath as well. Each of these will contain a strobe light for certain parts of our sequences to make things “pop” a little more.

Each section of the mega tree contains 3 sets of incandescent lights for approximately 1 amp per section totaling 16 amps for the wreath. Next year we hope to budget to upgrade this to LED for the power requirements. The wreath is about 60% complete as of today and we hope to be close to completion of tomorrow. 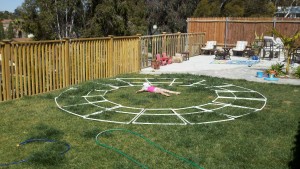 Mega Wreath segments laid out. Our daughter was about 34″ tall when this picture was taken.